GWADAR, Jan. 28 (Gwadar Pro) – Chinese Ambassador to Pakistan Nong Rong said during his visit to Gwadar that the Chinese side attached great importance to the development of Gwadar Port, and he had every good reason to believe that Gwadar would become a shining pearl of the region. 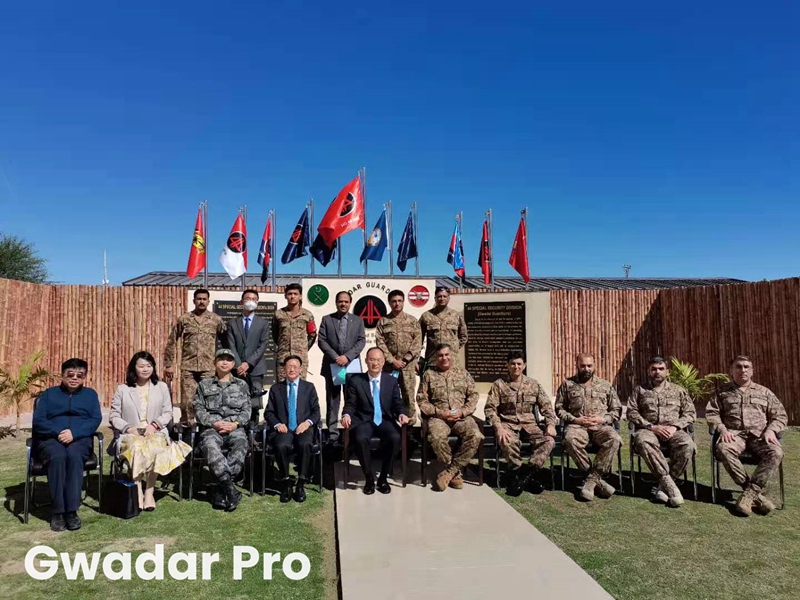 Ambassador Nong Rong visited Gwadar on January 27 till 28, 2021. During the two-day visit, Ambassador Nong visited all major projects under China Pakistan Economic Corridor (CPEC) in Gwadar, including the New Gwadar International Airport Project, the China-Pak Friendship Hospital, China-Pak Technical and Vocational Institute in Gwadar, the Gwadar East-bay Expressway Project, Gwadar Free Zone, and Gwadar Port.
He said with joint efforts from both China and Pakistan, Gwadar Port, as the pilot project of the CPEC, had witnessed dramatic changes, and become a model project for maintaining production and construction while doing a good job in epidemic prevention among all BRI projects.
“Gwadar would enjoy a bright future with the development of port industries, by building export processing zones based on local conditions. The city of Gwadar will develop as a whole, growing to be a benchmark for harmonious development, as well as a demonstration window for the success of Belt and Road Initiative,” the Ambassador said.
During the visit, he met Chairman Gwadar Port Authority Naseer Kashani, DG of Gwadar Development Authority Shahzeb Kakar, MajGen M.Aamer Najam, GOC SSD (South) and Rear Admiral Jawad Ahmed, Commander Pakistan Navy Western Command. He also attended the Chinese Ambassador Green Employment Scheme Launching Ceremony and Scholarship Award Ceremony for excellent students of Middle School Faqeer Colony Gwadar.
While meeting MajGen M.Aamer Najam, GOC SSD (South), and Rear Admiral Jawad Ahmed, Commander Pakistan Navy Western Command, Ambassador Nong appreciated the efforts made by the armed forces in safeguarding the CPEC projects and personnel. He underscored Gwadar Safe City is an inalienable part of Gwadar Smart Port City, which portraits a brilliant future for Gwadar. “I believe all the local people and the people of Pakistan are looking forward to this day coming at an earlier date. No one will hesitate to take the first step with a bright road ahead.”
Later, attending the Launching Ceremony of Green Employment Scheme, Ambassador Nong said that the project was responding to Prime Minister Imran Khan’s initiative for Clean Green Gwadar Movement, and China would work together with Pakistan to turn CPEC into a model green Belt and Road Initiative (the “BRI”) to protect and preserve the natural environment in the region.
Meanwhile, awarding Scholarship to excellent students of Middle School Faqeer Colony Gwadar, Ambassador Nong said, “2021 marked the 70th anniversary of the establishment of bilateral relations, and children were the future of the nation and the hope of China-Pakistan friendship.
He encouraged the students to cherish the opportunity, study hard, and grow up to become talents of the country and builder of the CPEC, and carry on the time-tested friendship between China and Pakistan from generation to generation.
Ambassador Nong also extended his festive greetings to the workers at the construction site. He said “the Spring Festival is coming, but you are sticking to your posts, with a common goal to speed up the project and make the Gwadar Port a better place. We all know that the Spring Festival is a time for family reunions. You spend the Chinese New Year alone on the project site far from the motherland and make Gwadar your home. I’m so proud of you!”
The Ambassador asked the companies in Gwadar to expedite the projects and take strict prevention and protection measures for the COVID-19 epidemic and make a greater contribution to the China-Pakistan friendship.